Giving Children Back to Christ Through Mary 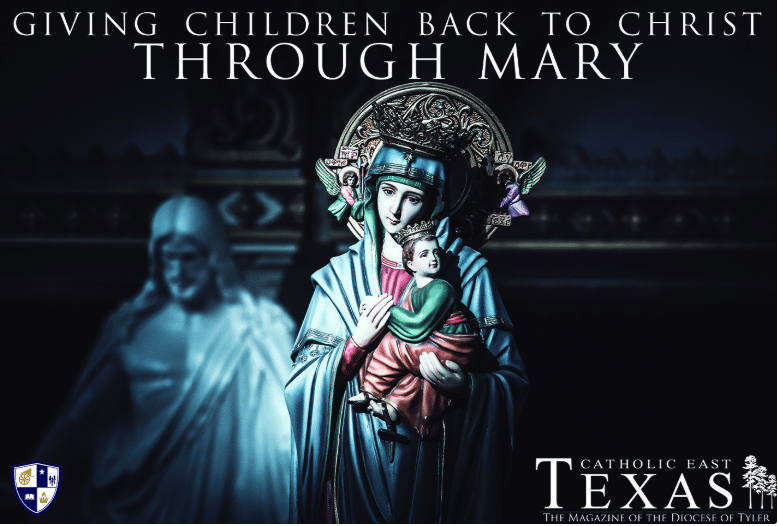 Just like that, my husband and I were sitting in the pew alone. For over fifteen years we managed children during Mass, but suddenly one Sunday the girls were helping with their jobs and our youngest boy was assisting as an altar server. I could hear all those times other women said to me: “Oh honey, don’t worry about your babies making noise. Enjoy it! One day they will be grown and you will be alone longing for the chaotic days of their childhood.”

I distinctly remember not being sad at that thought but rather looking forward to the far off day when my husband and I could sit in peace and actually focus on the liturgy. Taking small children to Mass can be exhausting. Parents know what I am talking about: the pacifiers that go flying, the squawks at all the wrong times, the crawling under and over the pews, the praying with one hand and holding a toddler by the ankle with the other hand before he scrambles down the isle, the missing shoe, the sibling rivalries, the wrong sized pants, diaper blow outs, and so on. In the moment, it can be hard to see outside the trenches, but now that I am in that once distant future, I realize that my husband and I were making memories. So many memories.

Back then, I was also a new convert. I’d grown up Southern Baptist before leaving religion altogether in my twenties. Children mostly go to the nursery or to Sunday school at Baptist churches so they do not distract the adults. Out of an instilled sense of obligation, I felt that it was wrong for my babies to be in Mass, and it took me years to stop feeling anxious (for my rapscallions indeed distracted many a soul). My cradle Catholic husband always reminded me, “It’s okay, Jesus wants children to come to Him.”

When I learned about the history of the liturgy, I came to understand the major difference in a Catholic Mass and a Baptist service. The former is centered on God, the latter on people. Slowly I started to put it all together: If we really believe that the Eucharist is the source and summit of the Christian life, if we really believe what we pray in the Creed, if we really believe that Christ is present in the Eucharist, then that is the most important place for children to ever be! The whole exercise in Mass became, for me, a practice in parenting, in letting go, and in respecting objective reality. I had not yet realized Mary’s role in all this.

I particularly remember one Sunday when we lived in upstate New York. I was attending Mass at our parish, a large and ornate Polish church with lots of color and statues everywhere. Although we usually attended Mass together, my husband was unable to be there at the same time, so I was the lone mother with five children under the age of ten, which made me quite nervous.

I had recently completed St. Louis-Marie de Montfort’s Total Consecration to Jesus through Mary. St. Montfort teaches that devotion comes from within the mind and the heart and follows from the esteem in which we hold Mary, the high regard we have for her greatness, and the love we bear her. Being trustful, when we go to Mary for help we show the same simple confidence a child has for its loving Mother. If we go to her in every need to seek God alone in His Mother, St. Montfort says the devotion will instill a certain “disinterest in the pains of life.” Those words stayed with me: disinterest in the pains of life?

Isn’t that what we do at Mass? I remember thinking it through. We objectively observe the holy sacrifice with a disinterest in our personal pains–because it’s not about us. Maybe it was because I was maturing as a mother, but attending Mass taught me to accept that life will bring suffering. To my surprise, the acceptance of suffering made it more bearable. The drive to avoid pain at any cost lost its grip on me. I was less panicked, less controlling, less fearful, more confident.

That day at Mass alone with five kids, when my little boy started to get too loud I was determined to stay calm. I matter-of-factly told the four girls to sit quietly, scooped up the toddler, and carried him to the narthex, not a bit unsettled or disappointed. I even smiled. Cool Catholic Mom here, nothing to see, no anxiety.

Once out, he continued to wrestle in my arms, so I pointed to a life-sized statue of the Blessed Mother mounted high on the wall. In her left arm she held the Christ-child, staring out at the world. I had admired that statue many times before, the mother so still, the infant so small. It was beautiful, lifelike. On a whim, I lifted my boy up in the air, as if handing him to her.

“Here, hold him for me,” I said. My son stopped wiggling and looked down to see if I was serious, somewhat concerned.

“Yes,” I said to him, “I’m giving you to Mary because I need her help. You are being too loud. You need to settle down and be quiet.” He settled down. When we walked back in, he glanced up at Mary once more, and I reminded him to be calm. I reminded myself too.

But I’d done it! I had mustered a “disinterest in the pains of life” in the very act of asking Mary for help, even in the little things. The sacrifice of Mass is a celebration of eternal life, a meeting of Heaven and Earth, a reminder that salvation has been purchased for us, including for these children I love. So what if there are periods of frustration? Sure, when I lifted my son up to that statue I was being light-hearted, but the gesture was not entirely symbolic. It was my way of confirming to myself that I had truly given all I have back to Christ through Mary. Even that willful boy.

The memory isn’t so much that I lifted him up and got him to calm down though. I remember that day because of what happened next. When it was time to receive Communion, I reached down as usual to pick my son up and carry him so he would not wander away. To my amazement, he turned himself around to get in line, clasp his tiny hands prayerfully, and proceeded to walk himself forward. When we reached the communion rail, he knelt beside me in silence. And then he walked back to the pew in perfect obedience. A two-year old! That memory is so sweet to me now. Mary had indeed held my son, guiding him gently along before my eyes, as if to return the smile I had given her, as if to tangibly show that she was with me all the way, so I could receive her Son in the Eucharist. It was just a small thing, but I’ll never forget the affirmation.

My son is eight years old now, the youngest of seven. These days when I kneel to receive Christ and that not-so-little young man holds the communion plate under by chin while standing next to the priest, I realize that I am still raising him up to Mary, giving him back to Christ through her, except now I have let him go a little more so he can become who he is meant to be.