The Sanctity and Beginning of Life in Divine Revelation 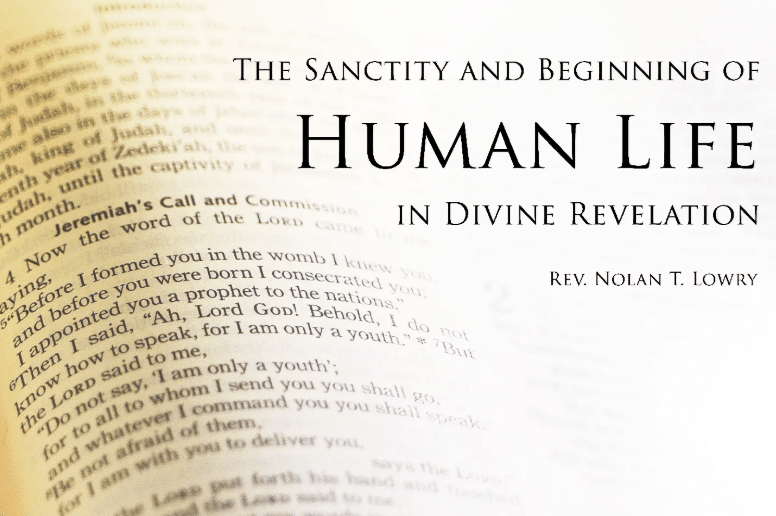 A few months ago, as I was getting a haircut by my barber, I was talking about the challenges of the pro-life movement in politics. My barber is a staunch Southern Baptist who always gives me a good sermon laced with corny Christian jokes. He told me, “I don’t see how these politicians who claim to be Christians can support abortion. I mean, the Bible is very clear about that.” It started me thinking about whether that is the best point of argument – even with fellow Christians who debate the place of abortion within the hierarchy of political issues – but also whether the Bible is clear about the intrinsic evil of direct abortion.

What does the Bible say about abortion? The problem is while the concept does exist– like many moral and doctrinal teaching– the actual word is not present in the Bible. Likewise, the word “person” is not found in the words of Sacred Scripture and yet is a way to describe an individual human being as well as a means to explain the Father, Son, and Holy Spirit in one God. The Bible does not explicitly condemn the sin of abortion since the word “abortion” is not present in the written words of Sacred Scripture; but, there are specific texts in the Bible that refer to the sacredness of human life and the fact human personhood begins even before the person exits his or her mother’s womb.

Human life must be respected and protected absolutely from the moment of conception. From the first moment of his existence, a human being must be recognized as having the rights of a person – among which is the inviolable right of every innocent being to life. . . Since the first century the Church has affirmed the moral evil of every procured abortion. This teaching has not changed and remains unchangeable. Direct abortion, that is to say, abortion willed either as an end or a means, is gravely contrary to the moral law.

These passages from the CCC cite passages in the Bible, but before we look at those, it is important to remember that the above teaching on abortion was virtually uncontested in the Western world from about the 4th century until the early 20th century. Not only was this a result of a strong Christian anthropological influence in the West, but also it was a consequence of a collective reflection on natural law and biology. The previous century was probably the bloodiest century in human history. There was concentrated disregard for human dignity, resulting in mass genocide and a lessening of sexual morality for a number of ideological, not scientific, reasons. Because of this disregard for human life, people began to question at what point a human life is valuable, instead of promoting the truth of its inherent and sacred value. As a result, it was concluded that a person’s value began at the moment of birth, and abortion was legalized across Europe and North America.

The crisis of human dignity in the 20th century prompted the popes of the time to issue strong teaching on the dignity of human life and the intrinsic evil of abortion, most notably in Pope Pius XI’s Encyclical Casti Connubii, Pope Pius XII’s addresses to the Biomedical Association “San Luca” and to Catholic Midwives, and Pope St. John XXIII’s encyclical Mater et Magistra. The Second Vatican Council also addressed the evil of abortion in Gaudium et Spes 51 §3:

God, the Lord of life, has entrusted to men the noble mission of safeguarding life, and men must carry it out in a manner worthy of themselves. Life must be protected with the utmost care from the moment of conception: abortion and infanticide are abominable crimes.

The most substantial teaching on the sacredness of human life in the 20th century was that of Pope St. John Paul II, specifically his encyclical Evangelium Vitæ (EV), which was promulgated on March 25, 1995. In it, he gave the most comprehensive and direct teaching on murder, abortion, euthanasia, and capital punishment. While these transgressions do not all have the same weight as regards moral gravity and complexity, they are all considered offenses against the sacred dignity of human life accordingly.

In dialogue with Evangelicals like my barber on the topic of abortion, EV is very helpful. Pope St. John Paul II provides all of the scriptural basis for human life at conception—that is, its dignity and sanctity at its very beginning. The first quotes come from the very beginning of the Bible:

Then God said: Let us make human beings in our image, after our likeness. Let them have dominion over the fish of the sea, the birds of the air, the tame animals, all the wild animals, and all the creatures that crawl on the earth. God created mankind in his image; in the image of God he created them; male and female he created them. (Genesis 1:26-2)

…then the LORD God formed the man out of the dust of the ground and blew into his nostrils the breath of life, and the man became a living being. (Gn 2:7)

By the sweat of your brow you shall eat bread, Until you return to the ground, from which you were taken; For you are dust, and to dust you shall return. (Gn 3:19)

From these Scripture passages, Pope St. John Paul II teaches that the human person is both material (from dust) and spiritual (created in God’s own image and likeness and having an immortal soul), and therefore is set apart and over the rest of the created world. St. John Paul II also draws from other passages (Job 10:8-12, Psalm 139:13-16, 2 Maccabees 7:22-23), but probably the most convincing evidence for the sacredness and inviolability of the person in the mother’s womb is the prophesy in Jeremiah 1:5: Before I formed you in the womb I knew you, before you were born I dedicated you, a prophet to the nations I appointed you. This demonstrates that even before physical birth, God was teaching the Jewish people that a person is in the mind of God even before conception. After conception, God continues to have a providential hand in the biological and spiritual formation of that person in the womb.

Jesus—the Incarnation of the eternal Word of God and the Second Person of the Blessed Trinity—is the quintessential teaching of Scripture about the sacredness of human life in the womb: And the Word became flesh and made his dwelling among us (John 1:14). The fact that Jesus chooses to be conceived miraculously in the virginal womb of Blessed Mary, to be carried in her womb for nine months, and to be born in a feeding trough in Bethlehem confirms the sacredness of human life even in poor conditions. The Visitation of Our Lady to her cousin, St. Elizabeth, also shows not only the presence of human life but even awareness of the child in the womb. When Elizabeth heard Mary’s greeting, the infant [John the Baptist] leaped in her womb, and Elizabeth, filled with the holy Spirit, cried out in a loud voice and said, “Most blessed are you among women, and blessed is the fruit of your womb” (Luke 1:41-42). The mysteries at the beginning of Our Lord’s life and the life of St. John the Baptist are major landmarks in Christian pro-life ethics. The herald of the Messiah is conceived miraculously in an elderly woman’s womb, and the fulfillment of salvation history begins definitively in the immaculate womb of Mary!

The clearest teaching in the Bible against the taking of innocent life is the fifth commandment, “Thou shalt not kill” (Ex 20:13; Dt 5:17). God’s gift of human life is precious and inviolable. Because God freely gives this gift, He is its “go’el”, the Hebrew word for defender. “In giving life to man God demands that he love, respect, and protect life. The gift has become a commandment, and the commandment itself is a gift” (EV 52). The fifth commandment is absolute and without exceptions when it refers to innocent human life. It follows that human life in the womb is the most innocent and most defenseless. “[T]he human being is to be respected and treated as a person from the moment of conception; and therefore from that same moment his rights as a person must be recognized, among which in the first place is the inviolable right of every innocent human being to life” (EV 60).

Pope St. John Paul II completes EV with a focus on the Blessed Virgin Mary as patroness of the unborn. He identifies her with the “woman clothed with the sun” in Revelation 12, who is seen as an image of the Church. Our Lady helps the Church to “realize that life is always at the center of a great struggle between good and evil, between light and darkness” (EV 102). The vision given to St. John, “the dragon stood before the woman” of Revelation 12:4, shows the demonic forces behind the culture of death that the Church must battle against until the end of time. Our Lady helps us to realize that “it is precisely in the ‘flesh’ of every person that Christ continues to reveal himself and to enter into fellowship with us, so that rejection of human life …is really a rejection of Christ” (EV 104). The Blessed Virgin is the one who helps us face our mission to proclaim the gospel of life. Like her, we can be not afraid, for with God, nothing is impossible. †