The Apostasy that Wasn’t: The Extraordinary Story of the Unbreakable Early Church By Rod Bennett 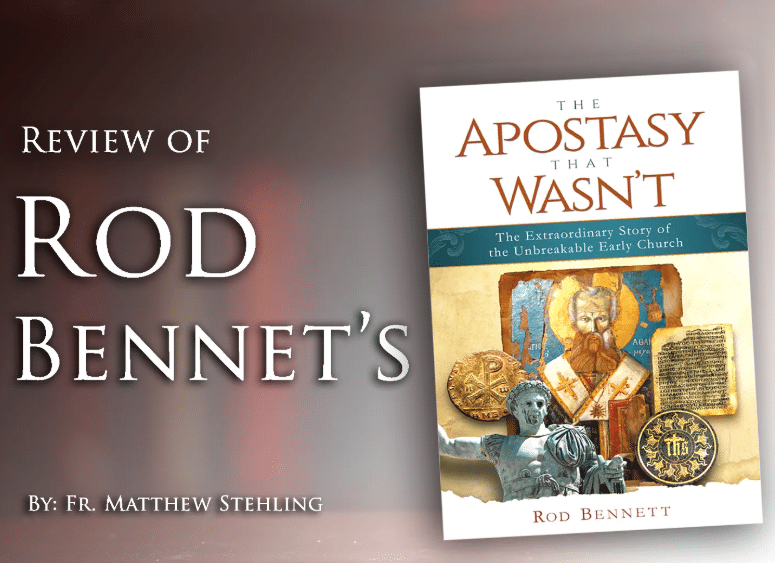 Have you ever heard of the “Great Apostasy”? It was not a term I was familiar with, even as a priest, but it is a concept that I’ve dealt with quite a few times. Frequently it comes up when answering the questions of Protestants and fallen away Catholics, and there are even some faithful practicing Catholics who believe, in part, in the idea of the “Great Apostasy.”

It can be summed up like this: after the death of Jesus and the Apostles, and a short period of faithfully following the Gospels, the Church went astray. As the Roman Empire converted, and the persecution by the state were ended, the message of the Gospel were subverted by pagan religious practice and belief. Constatine is usually seen as a main player in the idea of this great “falling away.” That at the Council of Nicaea he introduced theological ideas that took the Church away from what it always taught.

This idea, whether explicit or not, is at the heart of the Protestant Reformation and many of the subsequent sects that arose in the 18th and 19th Century. They all are striving to return to the “purity” of Christianity before the “Great Apostasy”.

Rod Bennett’s book The Apostasy that Wasn’t pulls the rug out from under the idea of the “Great Apostasy” and Protestant reformers by giving us an in-depth and enjoyable narrative of what really happened during the reign of Constantine and the Council of Nicae in 325 and subsequent years.

While also introducing us to the real hero behind the continued fidelity of the Church to the teaching of Christ and the Apostles, St. Athanasius, Bennett weaves a narrative of the main figures involved alongside many of the extant accounts and documents of the time period. The book almost reads as a historical novel in places. The effect is a historically accurate and accessible account of the early 4th Century and the debates that fuel the myth of the “Great Apostasy.”

Constantine: Until the early fourth century, the Roman Empire was divided, East and West, and ruled by 4 emperors, called the Tetrarchy. Un 312 A.D., Constantine began to solidify his power as sole emperor by defeating Maxentius at the Milvian Bridge just outside of Rome. This battle marks the beginning of Constantine’s conversion to Christianity (however, Constantine wasn’t baptized until 337 A.D., on his deathbed). Bennett’s account of Constantine in the book gives us a very different view of Constantine than we find in contemporary portrayals. The Emperor did, in fact, call for and host the council of Nicaea. What differs is that he was not a man particularly well-formed on Christian theology. His main goal in the Council was to settle the debates that had been raging in the Church about the nature of Jesus. He himself didn’t have a particularly strong opinion one way or the other. His concern was more focused on ruling and maintaining peace within a vast empire, not imposing his particular theology. Constantine would support the findings of the Council of Nicae, but he wasn’t always consistent in his theological thought and vacillated between the two sides.

Athanasius: The hero in this story is St. Athanasius, friend and student of St. Anthony of the Desert. Athanasius was a fiercely devout priest who defended the divinity of Jesus with his work De Incarnatione (On the Incarnation). Bennett describes his work as follows, “On the Incarnation is perhaps an unusually vivid but nevertheless perfectly ordinary expression of traditional beliefs about the divinity of Christ; there isn’t a single new or original idea in it, as anyone familiar with the writings of the apostles and Fathers of the first three Christian centuries must frankly admit.” But this clear restating of the Faith of the Church sparked a vigorous debate. Athanasius would become the champion of Christ’s divinity at the Council, upholding and condigying what had understood by the earliest Christians, that Jesus is “begotten, not made” as the Nicene Creed says.

Arius: On the other side of the debate in the 4th century is Arius, a very learned priest from Alexandria, Egypt. In response to De Incarnatione, Arius began preaching something new from the pulpit: he taught that the title Son of God meant that Jesus was created by God, and that there was a time in which the Son of God did not exist. Arius used the terms “begotten” and “created” interchangeably, thus contradicting the fundamental truth handed from the beginning, that Jesus is God and that he existed from the beginning, as the Gospel of John 1:1 proclaims. His bishop Alexander attempted to correct the wayward priest, but he was growing older and was not as skilled a debater as Arius. Arius accused the Bishop of holding to Sabellianism, a heresy that claimed the FAther, son and Holy Spirit are only aspects or modes of God (also called modalism) and refused the correction. The arguments and debates great until Constantine decided to step in to stop the division.

Nicaea and the Creed

Over three hundred Bishops from all over the Empire and beyond attended the Council of Nicaea. Debates began with Arius and Eusebius of Nicomedia presenting their side, arguing that Jesus was created by God and that Jesus the Son of God was not eternal- that there was a time when the Word did not exist. Athansius, a young man and not eligible to vote, took the lead in the debates for the traditional understanding of Jesus’ divinity. Of the Council itself, Bennett points out that:

“[There was] no humanitarian party present at Nicaea; no group of clergy advocating, that is, a merely human Christ, a prophet or wise man only. No, the Arians were thoroughgoing supernaturalists who did not deny the Virgin Birth, the Resurrection, any of Christ’s miracles, nor his claims to divinity. The DaVinci scenario, in other words, which pictures the Council of Nicaea as the final showdown between what became Roman (Catholic) orthodoxy and an earlier, “purer” Christianity that followed an enlightened but simply human sage, has no basis in fact at all.” (138)

As the dust from the sessions settled and a vote was tallied, only around 17 bishops signed in support of Arius. The rest sided with Athanasius and affirmed what we still profess in the Nicene Creed, that Jesus is the “only Son of God, begotten, not made, consubstantial with the Father.”

The Rest of the Story

The adoption of the Creed at Nicaea was not the end of the controversy. Constantine supported the findings of the Bishops at Nicaea, but went further than the council fathers and exiled Arius as a threat to tranquility in the empire. (Constantine would later recall Arius from exile however.) Athanasius went on to become the Bishop of Alexandria, being elevated over other older more seasoned priests because of his staunch defense at the Council, which gained him some enemies.

For many who believe in the “Great Apostasy,” this is where the story ends. But Bennett gives us the rest of the story, showing that much of the support that existed for Arius’s teaching was more about political power than a search for truth.

Accusations were launched against Athanasius in a smear campaign by Arius’s supporters, which resulted in the Emperor exiling Athanasius, and he sought refuge in Rome with Pope Julian I. Upoj Constantine’s death, the empire was split between Constantine’s sons, and Athanasius returned briefly. One of the sons, however, Constantius, emperor of the eastern part of the empire, was sympathetic to Arius’s teachings, because it afforded him political opportunity: undermining the divine and human nature of Christ undermined the relationship between the relationship between the Church and the world. It allowed the state to remain independent of the divine and to retain its political clout without interference from the Church.

Athanasius remained faithful to what was proclaimed at Nicaea despite the political intrigues and exiles imposed by Constantius and later Julian the Apostate. He would not, however, live to see the end of the Arianism against which he fought for so much of his life. Athanasius died in 373, less than a decade before the Council of Constantinople would put to rest the Arian controversy and give us the formula of the Creed that we use today.

There was an apostasy during the 4th Century, but it was the Catholic Church- through its leaders like St. Athanasius- that held the Church together around what had been believed by the earliest Christians. The only apostasy was Arius and his followers. I highly recommend Rod Bennett’s book The Apostasy that Wasn’t is a great resource in telling the story of how the early Church was Catholic.