The Right to Religious Freedom Should Inform our Voting

In his World Peace Day message for 1988, Pope St John Paul II said: “Religious freedom, an essential requirement of the dignity of every person, is a cornerstone of the structure of human rights, and for this reason an irreplaceable factor in the good of individuals and of the whole of society, as well as of the personal fulfillment of each individual. It follows that the freedom of individuals and communities to profess and practice their religion is an essential element for peaceful human coexistence. […] The civil and social right to religious freedom, inasmuch as it touches the most intimate sphere of the spirit, is a point of reference for the other fundamental rights and in some way becomes a measure of them”

This emphasis on religious freedom ran throughout the late Popes teaching magisterium. It was demonstrated early in his service to the Church. For example, then Bishop Karol Wojtyla’s actions at the Second Vatican Council. He made five interventions during the discussions which helped to formulate the final Declaration on Religious Freedom (Dignitatis Humane) which was promulgated by Pope St Paul VI on December 7, 1965.

This is all in keeping with his rich understanding of the essential connection between truth and freedom as discussed throughout “The Splendor of Truth” (Veritatis Splendor) where John Paul warns of the “death of true freedom” (Par 40) . It is also addressed repeatedly in “The Gospel of Life” (Evangelium Vitae) where he writes of freedom’s “…essential link with truth” and “…inherently relational dimension.”(Par. 19)

In his encyclical letter on “Faith and Reason”, Fides et ratio, he wrote: “It is not just that freedom is part of the act of faith: it is absolutely required. Indeed, it is faith that allows individuals to give consummate expression to their own freedom. Put differently, freedom is not realized in decisions made against God. For how could it be an exercise of true freedom to refuse to be open to the very reality which enables our self-realization? Men and women can accomplish no more important act in their lives than the act of faith; it is here that freedom reaches the certainty of truth and chooses to live in that truth.”(Par. 13)

As the Second Vatican Council affirmed: “This Vatican Council declares that the human person has a right to religious freedom. This freedom means that all men are to be immune from coercion on the part of individuals or of social groups and of any human power, in such wise that no one is to be forced to act in a manner contrary to his own beliefs, whether privately or publicly, whether alone or in association with others, within due limits. “The council further declares that the right to religious freedom has its foundation in the very dignity of the human person as this dignity is known through the revealed word of God and by reason itself. This right of the human person to religious freedom is to be recognized in the constitutional law whereby society is governed and thus it is to become a civil right.” (DH Par. 2)

As we approach the upcoming elections in the United States, the candidates stand on religious freedom must be paramount in our choices in the ballot box. The soft persecution of faithful Christians, across the confessional spectrum, is obvious to anyone who cares about religious freedom. The growing hostility toward the symbols of our religious heritage, the mocking of the values informed by religious faith and the overt and open hostility toward people of faith and religious institutions is increasing.

Religious freedom is called the first freedom in the American polity for good reason. It ensures that the leavening role of revealed truth helps us to form our conscience and shape the choices we make as individuals, families and, as a society.

The American founders fled coercive approaches to religion which compelled adherence to a particular sect. An incorrect interpretation of the Establishment Clause in the First Amendment to the Bill of Rights has arisen in our day which promotes a notion of a Church/State separation that is hostile to religious institutions, discriminates against people of faith and seeks to censor religious speech and expression in the public square.

Religious faith should be encouraged and accommodated by the federal and/or state government, not treated with hostility. Rightly understood and applied, religious freedom means a freedom for religious expression, not a removal of such expression in the public square. Religious faith, religious institutions and religious speech are protected by the First Amendment to the Bill of Rights.

The Birth Certificate of our Nation, the Declaration of Independence, affirmed the existence of inalienable rights and self-evident truths. The Rights of Life, Liberty and the Pursuit of happiness were understood to be endowed by our Creator and not conferred by a Federal or State Government. Implicit within the classical understanding of happiness is the pursuit of virtue – and virtue requires religion.

The Right to Religious Freedom protects people of all faiths to participate in the public square and to be a part of the daily social interactions that constitute the very tapestry of our social life. Religious faith is a human and social good.

The drafters of the First Amendment to the Bill of Rights used the phrase “Free exercise of religion” for a good reason. The protection which it guarantees to American citizens goes beyond the freedom to worship within the four walls of our church buildings. Exercise involves action. The First Amendment protects our fundamental right to bring the values informed by our faith into the social, economic, and political arena as good and faithful citizens.

The Free Exercise Clause has been turned on its head. An errant interpretation is increasingly being used to silence the Church and the religious speaker and actor. There is a dangerous trend of labeling anyone who supports the value of the undeniable Jewish and Christian roots of the West as backward, bigoted or, worse yet, trying to impose a theocracy and undermine freedom. The fact is, the Church was and is the guarantor of authentic freedom.  Hostility toward the role of faith in our life together and efforts to censor the vital role it has played in our history and founding, is corrosive to true freedom.

The free exercise of religion is not only a constitutional right in the American polity, it is a fundamental human right in Catholic teaching. And, it should inform our choice of who we elect from among the candidates in the upcoming election.

<–Back to the videos and entire Morally Coherent Catholic Citizenship series 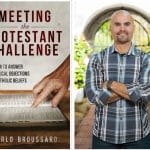